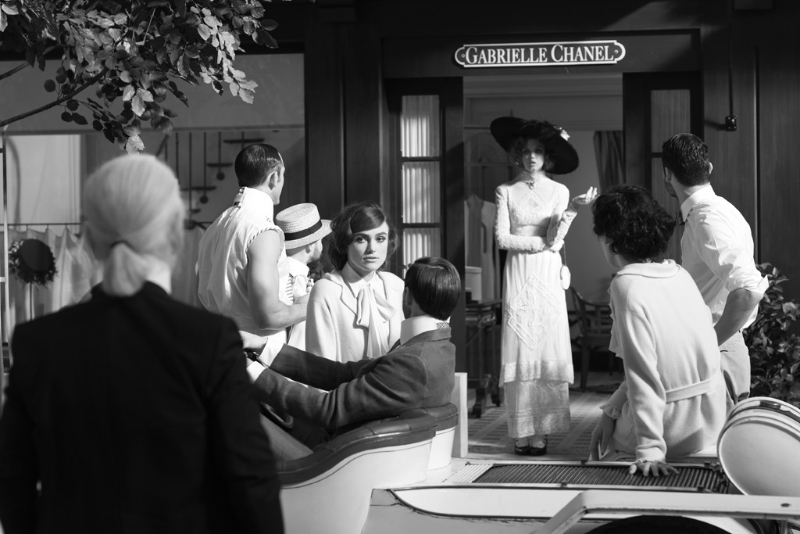 Karl Lagerfeld’s latest short film. Titled ‘Once Upon a Time…features Keira Knightley as ”Coco” Gabrielle Chanel,film on the occasion of the 100 years anniversary since the opening of the first Chanel shop in the luxurious style haven of Deauville,France. Directed by Karl Lagerfeld, in black and white,the short film is an amalgama of excellent dresses and jewelry,vintage cars and fabulous settings.

Karl Lagerfeld uses as an main narrative idea the recreates one of Chanel’s first boutiques on a street in the French seaside town of Deauville using a super cast with the likes of Stella Tennant, Jake Davies, Baptiste Giabiconi and Brad Kroenig. The main idea that initially existed was of a silent film and a certain kind of …difficulty delivering the lines is obvious when watching the film.After all Karl Lagerfeld isn’t actually a director and-apologizing to his devoted fans-its pretty obvious here given the deficiencies of the particular short film. These may happen due to Lagerfeld providing the actors with their lines just a little bit before filming((as reported by Fashionista),The idea of doing that to make the dialogue more ”natural” is so ambitious since he’s dealing with inexperienced actors that perhaps only Cassavetes could manage to deal properly in that sense.There is no Cassavetes there unfortunately,so the dialogue sounds biased and bizarre,with actors bearing French accent while Keira-Chanel,a British one!What’s left at the end is wonderful settings,immaculate costumes and beautiful film stills in a nostalgic black and white format.Not bad still not was it was expected given the anticipation the film’s trailer created when released back in April.